That’s when my throat got all lumpy. Could have been a touch of PMS, and since my hormones are going nuts these days pretty much 24/7, who the hell knows.

But there I was, all lumpy, thinking about going back to Saigon.

Manila was shut down and Philippine Airways cancelled my Saturday flight out, hence my day-early departure. Everyone was trying to grab a glimpse of His Pontiffness. We had anticipated a slow drive to the Manila aeroport (Philippine Airlines, terminal 2), but one of those magical things happened, sort of a Tragedy of the Commons in reverse: everyone figured the streets would be madness, so… they all stayed home!

Bless them, because there is nothing quite like a Manila traffic jam!

So it was a very fast drive to the aeroport, which was good and bad. Good because, well, fast drive. Bad, because I missed the pope’s response to President Aquino’s interesting speech. I especially liked the part where the president whacked the Catholic clergy upside the head for their lack of a moral stance during the Marcos years. It needed saying, but mmmmm, not such a nice way to present a guest.

I’m typing this now on our approach to Saigon, trying to concentrate on typing this while looking out the window. It is very hazy, but I can still see the green mountains, red clay, and rice fields below. Luckily, I’m a tremendously talented tyist ;ijpaoinl ’kasndo figja[ ‘sij./

[I found that I was spending far too much time trying to learn iMovie to edit some of the video I shot (badly). So in the interest of not falling down a rabbit hole again, videos are unedited, uncool, un-music’ed, and un-narrated.]

This is the hazy approach to Saigon:

Finally on the ground: bunkers. Familar-ish, because you know they must have been there “before”: 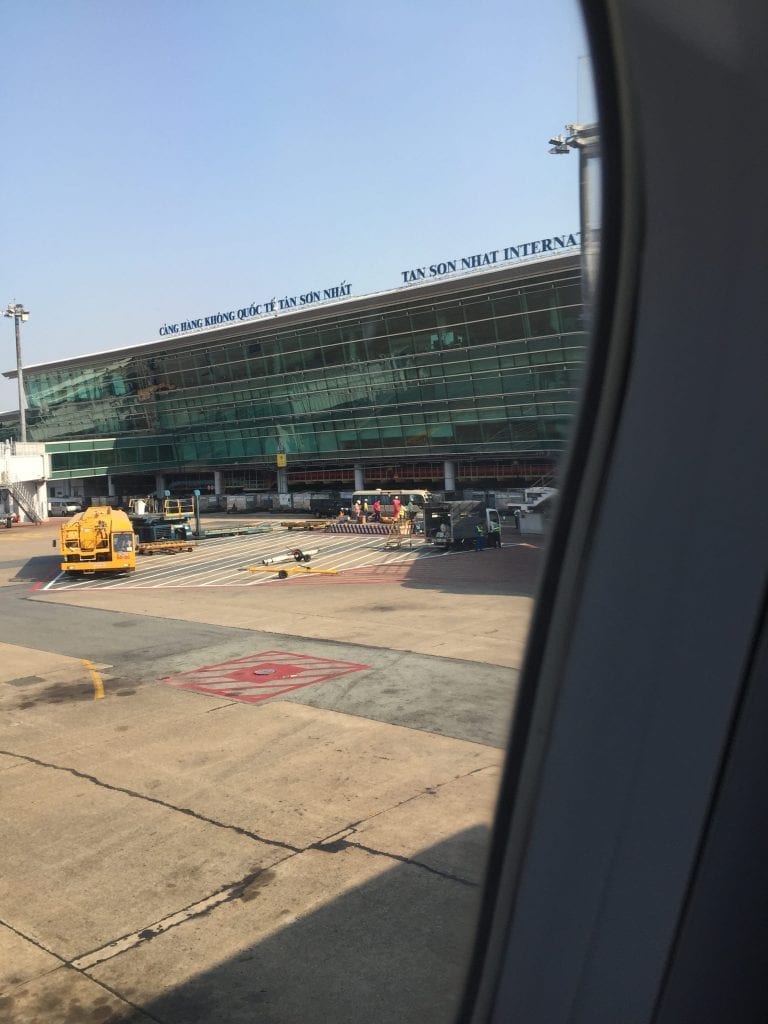 Customs is fun, but only for the first hour or so waiting for the Visa On Arrival: 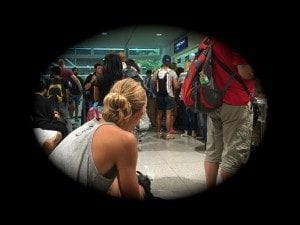 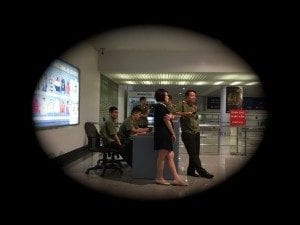 [Don’t tell anyone I surreptitiously snapped pics in customs!] There was some poor lady from Holland who had been awaiting her visa for over four hours. It only took about two hours until I heard my name announced. Well, it remotely resembled my name. I’m convinced that the young woman doing the announcing had been chosen deliberately for her starring role in “How We Won the War and Then Made the Farang Nuts.”

Remember Colin Firth in “The King’s Speech”? Imagine him trying to say “Meekle Ryefee” with seven marbles in his mouth. Michelle Life in Vietnamese. (To be fair, I got some fair giggles at my attempts at Vietnamese, so there’s that.)

After bailing four Finnish teens out of customs ($45 each, and not a dime on them! If you’re reading this, guys, remember to pay it forward!), I met my ride and guide (about whom more later), and we were off to the races!

And finally, it all felt so familiar, and on the drive into the city from Tân Sơn Nhất, I started falling in love with Saigon all over again.