I am so behind on my writing, but I do have a great excuse: I spent the last month breathing Southeast Asia back into my blood. Man, what a trip.

I’m back now. Back in “the world,” that is. I’m already experiencing a hint of the re-entry trauma that hit me when I first moved to America as a teenager. Well, maybe not such a trauma this time, but in any event, I’m not putting my suitcase away any time soon.

Yes, yes, yes, I hear you snickering back there in the cheap seats: “Oh look, darling, it’s the American Tour!” If you haven’t seen the movie “If it’s Tuesday, This Must Be Belgium,” I highly recommend it. First, if you can get over the early 1970s fashion horror, its humor has stood the test of time. Second, the must-leave-for-the-next-tour-stop-NOW frenzy is captured nicely, except…

This was not that. Not by a long shot. Yes, there was a lot going on. A LOT. And yes, tour buses were involved. But I asked random people on this crazy trip what they would have skipped in return for more leisure time, and not one of us would have changed a thing. (Watch the movie anyway for the comic value.)

I spoke to my mom back in the States pretty frequently (SIM cards + Skype work very nicely, thank you), telling her about the awesome time we’d had the day before in wherever we’d happened to be. “You got to go WHERE?!” she usually exclaimed. You see, it was a tad difficult to travel hither and yon when we lived in S.E. Asia, what with the war, and all that rot. (Sorry, catching up on “Downton Abbey” in the background and it rather rubs off. See also, “Third-Culture Kids As Annoying Mimics,” article coming soon.)

So three factors contributed to this trip having been so fan-freaking-tastic:

So after my visit with Sylvia and Roland in Manila, it was off to Saigon (landing re-visited in this post), where I would meet my intrepid travel companion for the rest of the trip, Trisha Steiner, my mother-in-law. This is Trish, hopping on with my favorite xe om driver for a trip across town: 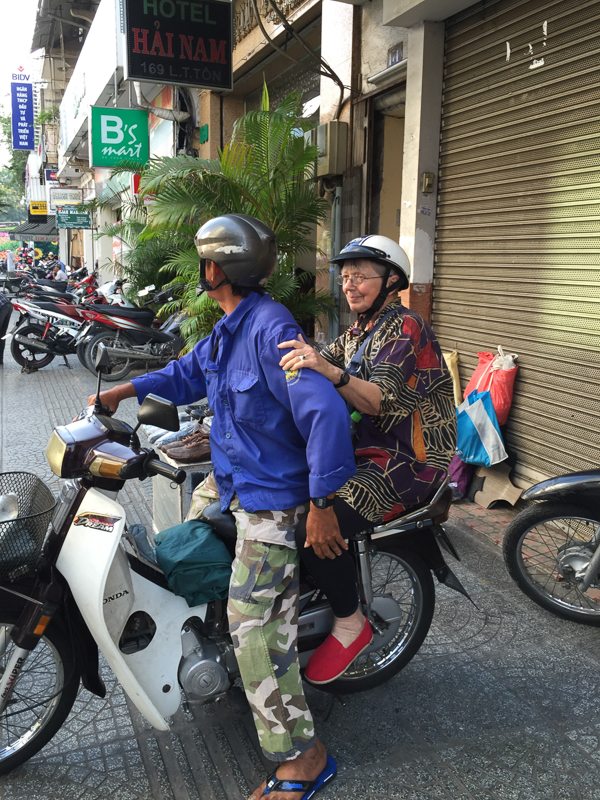 Trish hesitated for a nano-second about what to hold on to. Driver just laughed, reached back, and placed her arms firmly around his middle, and off we went!!

So ta for this evening–we’re off to the races!