Our Gift from Laos

I have a brother, Sean. Sean Doron Westlake. 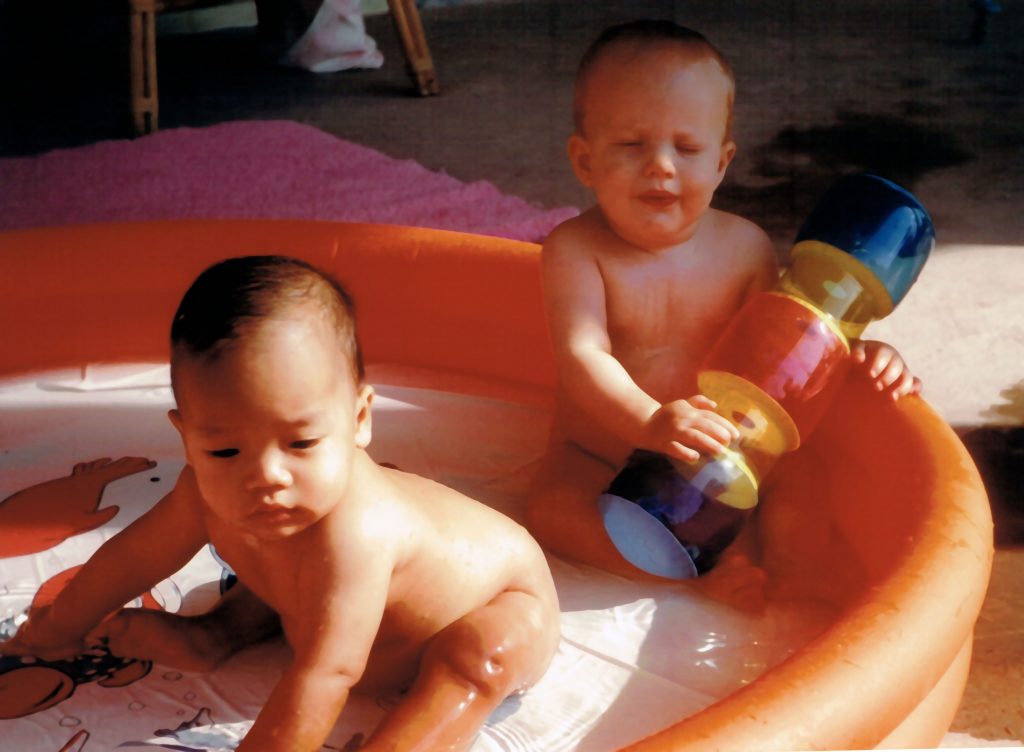 How lucky am I that I have a Baby-Butt Picture of Sean!?

Most siblings get a few months head’s up about impending newcomers, but we’ve always done things a little differently in our family, so Sean just kind of popped in one day: ten days old and the cutest baby in the universe!

We arrived in Laos in the mid-1960s, smack dab in the middle of a war. We were posted in the administrative capital, Vientiane, and lived in a community called KM-6. (Because it was six kilometers out of town. Duh.) There were about 100 American families living there, and the American School of Vientiane (ASV). (Noam Chomsky wrote an excellent essay about the war in Laos, and about the living conditions in Vientiane. He also made some pretty snarky—and ridiculously inaccurate—observations about how we lived there. Because he was a bit of a dick about it, I’ve chosen not to share the citation to his story. That’ll show him! I will eventually blog about it, but only when I’ve had a chance to tear it to absolute smithereens—at least the snarky parts!)

The population of Vientiane at that time was about 100,000 and it was truly a one-horse town. Well, a one-water-buffalo town. Drinking water was available from wells or the Mekong River, but it was not potable. Hell, if you held your untreated water up to the light, you could see little things swimming in it! We had to full-roll boil our water for 20 minutes and then filter it. [It took me years to get used to drinking water out of the tap, and I’m still a tad uneasy about it to this day!] 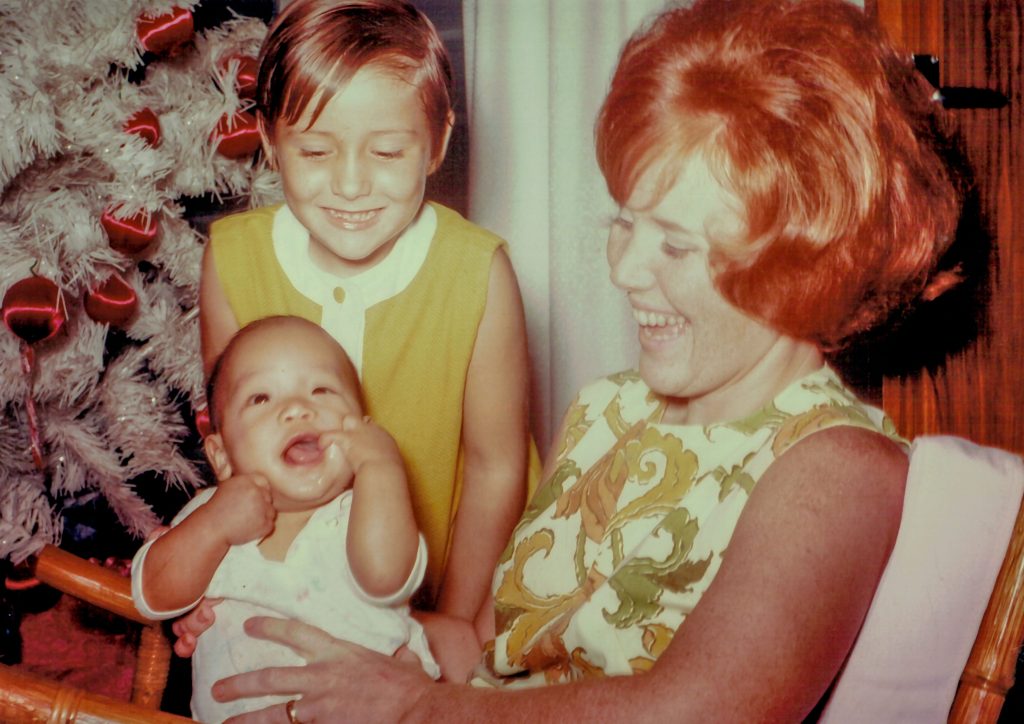 Perpetual drool on his chin. It was a talent!

Schools for Lao children went only to the 6th grade; after that, children had to learn French or English and pay for additional schooling, so really, only wealthy Lao who were able to speak English and/or French had an education higher than the 6th grade.

Local transportation was by taxi, bicycle (made in China), foot, or water buffalo. There was no reliable phone service, no grocery stores that anyone in the States would recognize—food was either grown or bought from farmers or traders at local open air markets.

From the 1966 US Embassy’s Lao Post Report: “Because of inadequate Lao medical, nursing, hospital, and public health facilities, Laos has all the diseases endemic to this area including tuberculosis, malaria, and dysentery.” A Lao’s life expectancy was 35 years.

As if the Lao didn’t have enough to contend with, there was the war. The Pathet Lao (communist insurgents) conscripted local young males to help the fight for liberation from the Western Imperialists (so that the communists could become the new imperialists—but that’s another story). We (the United States) were also bombing the absolute crap out of the country (and that’s another story, too, and what a horrid story it is!).

Generally, the embassy frowned on our traveling more than 10 kilometres outside the city. If we needed to visit other places within the country, we could hitchhike on an Air America prop plane. Flying in Laos was always a challenge, and I have very good friends who lost their fathers flying there for Air America. 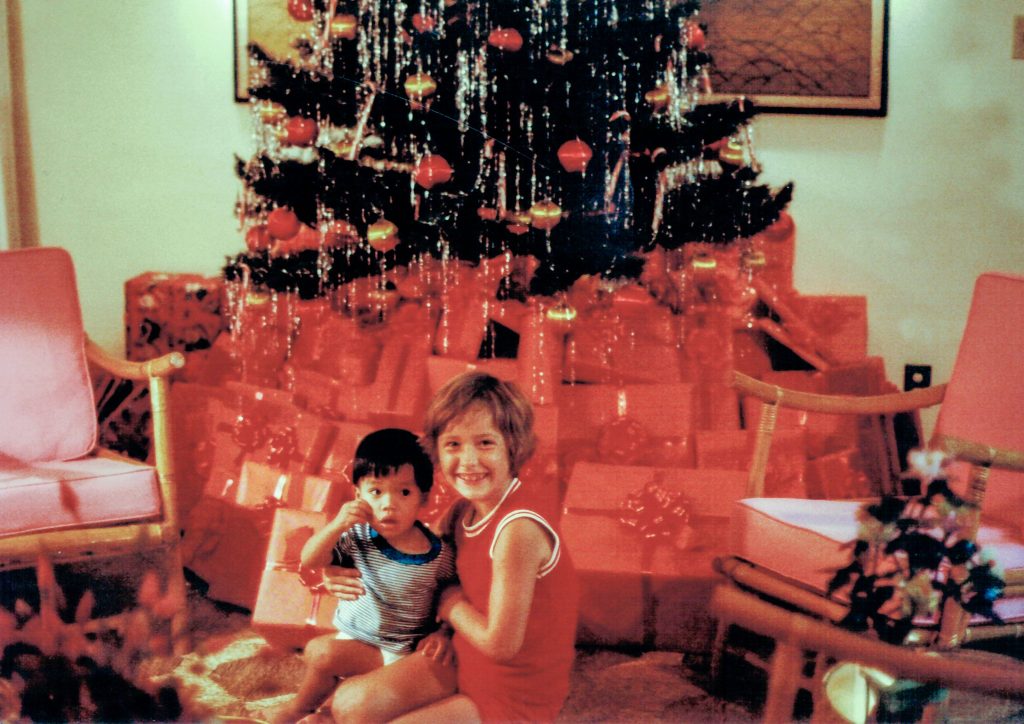 (Most of those boxes are empty!)

Are you getting the picture? Laos was no picnic, but it was home, and we loved it. (And I have had the fortunate opportunity to fall in love with it all over again, but … yup: another story.) 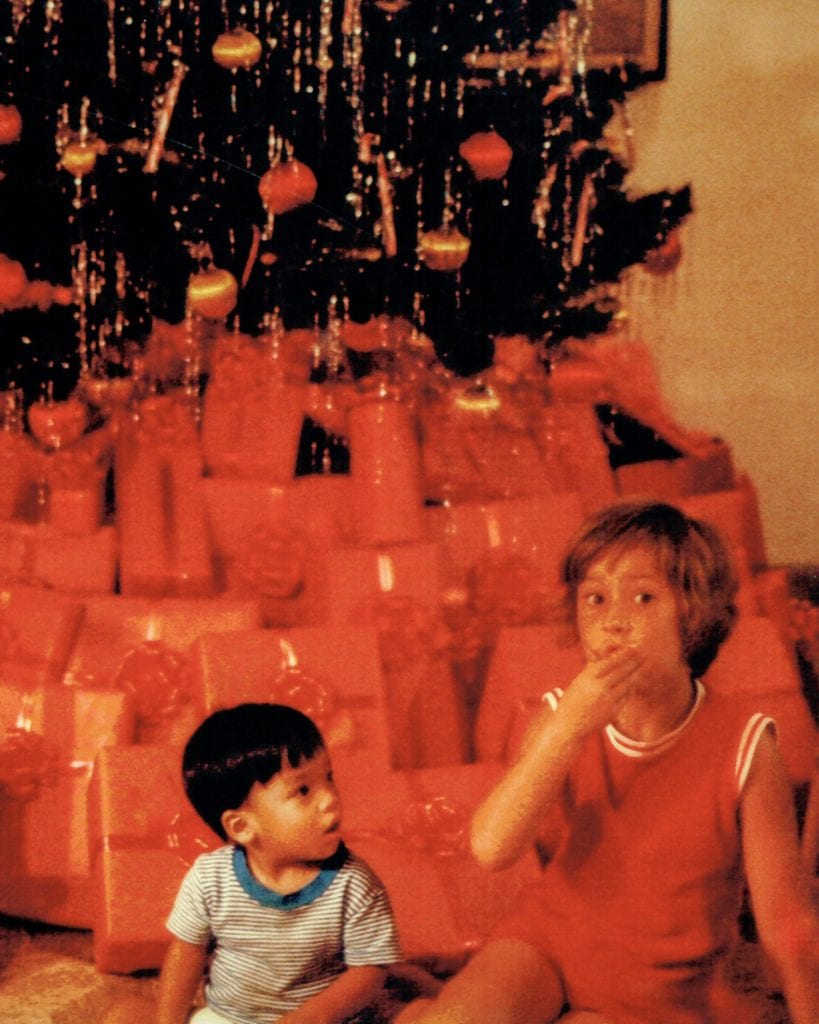 Sean catches me eating something I shouldn’t be eating!

Savannakhet is a town about 152 miles south of Vientiane. It had a population then of about 40,000 and was even more, um, basic (that seems polite) than Vientiane. My ex-step-father (aka Fang) would occasionally fly there for work, and on one of these trips, he mentioned to friends that he and my mom might be interested in adopting a child.

Some time later, a radio message was relayed to the ‘rents (phone service? You’re kidding, right?!) that there was a new-born baby boy up for adoption in Savannakhet. Were they interested?

I guess they were, because they hitched a ride down to Savannakhet to have a look-see with a friend who was an Air America pilot. 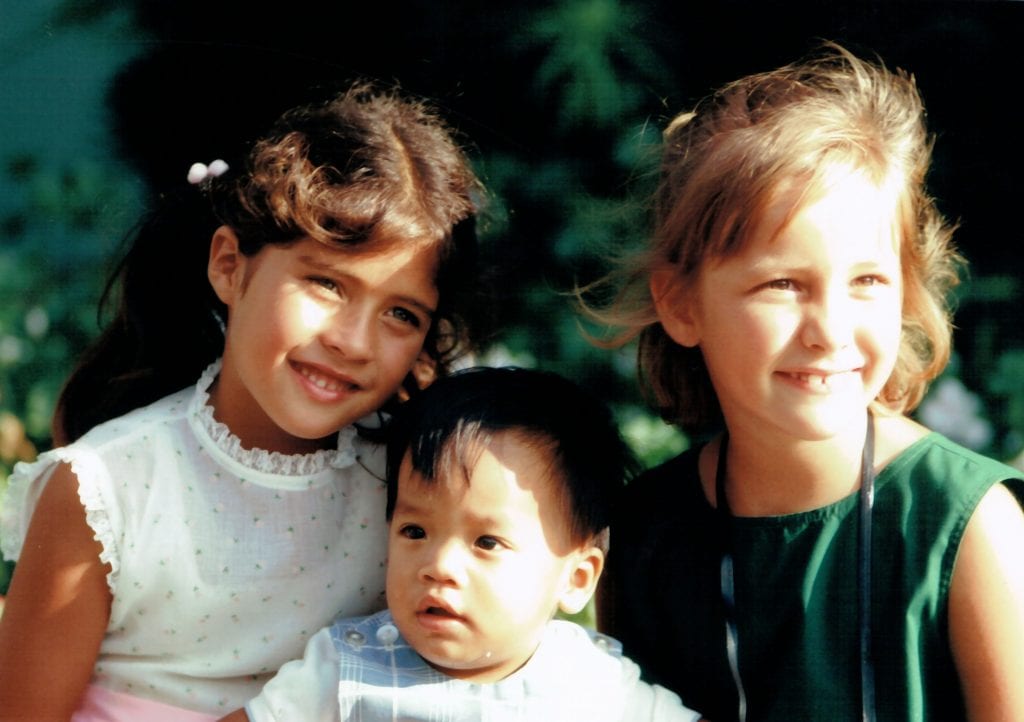 Me, Sean, and my friend Rebecca

A lot of the orphanages in Laos were run by Holt International (an American organization out of Oregon), or Catholic Relief, but this one was a local Lao-run orphanage. When they got there, out came a lady with a ten-day old baby, tightly wrapped in a blue cotton baby blanket. The lady handed him to my mom and basically said, “Here. Go.”

An hour later, they were on the plane back to Vientiane. My mom clearly remembers that the dear pilot kept the plane as low as safely possible so that the pressure wouldn’t hurt Sean’s ears. Air America: full service, man!

And that was that! My mom never saw any paperwork passing any hands.

Family friends donated all kinds of baby accessories, but I remember Sean sleeping in the bottom drawer of a dresser for what seemed like the longest time.

The ‘rents applied for the adoption paperwork from the Lao authorities in Vientiane, and told the story of their Savannakhet trip to a Lao official, giving him the location of birth and the name of the orphanage. My mom remembers this taking place in a single room-sized building on stilts. No paint. Just worn wood floors that you could see daylight through, a desk of sorts, open spaces for windows, and some type of shutters. The Lao official took down the information and my mom assumed that some sort of, um, cadeau would be required to make sure the paperwork went through.

And sure enough, the official did want something: might my parents have a couple of extra bookcases he could use for his office?

And that’s how I got a baby brother. Did I mention that Sean’s middle name, “Doron,” means “gift” in Hebrew?