This is a post that I actually wrote a year ago. In the madness of getting back from NY and dealing with a recalcitrant client, I lost track of it and thought that I’d posted it. I had not, it turns out; and in so not doing, I did M et Mme Ghazi an extreme disservice, as I had hoped to thank them for their kind hospitality in my own little writing way. So, here it is (mildly updated), in the best tradition of “Terribly sorry I’m late, but are you happy to see me?”

When I travel on business, I am usually head down, aeroport → hotel → meeting → hotel → aeroport. For example, on a recent trip, I spent two weeks with a client in Cambridge, MA. I never once got into Boston proper. Seriously: it’s like 40 feet away (ish) over the Charles River, and I just couldn’t be bothered!

Sigh. That’s how I roll on business trips.

Every single time, I vow to stop and smell the roses, but it somehow seldom happens.

It started with one of those Facebook postings we all put out there sometimes. “Hey everyone, I’m going to be in {YOUR TOWN} next week (you lucky dogs!), and I would love y’all to just drop everything and entertain me!”

Yeah, I pulled one of those. On this trip, Jean-Yves Ghazi and his wife, Christine, said: Hey, let’s get together for a drink or something.

“Or something,” they said.

Jean-Yves is a friend from many (MANY) years ago, when we were both high school students in Monrovia, Liberia. (Yes, that’s in West Africa; yes, that’s where Ebola is now; yes, it’s a very long story, but a very happy one from an awesome childhood and for another time.)

Now, it turns out that Jean-Yves is the Director of the Empire State Building.

Wait, I have to put that in some kind of cool typeface:

And because Jean-Yves gets to do this cool job, and he’s a generous kinda guy, he offered to give me a tour of the building.

No, no, no—not THAT tour of the building.

We meet in the lobby, the first time in (much counting on fingers and we realize, more than slightly aghast) over 35 years (holy crap!); high school friends who have shared “interesting times” (as the Chinese proverb says) in interesting countries. But we’re standing in the middle of the lobby of the most iconic building in America, and somehow “do you remember so and such” is subsumed by the splendor of this building. 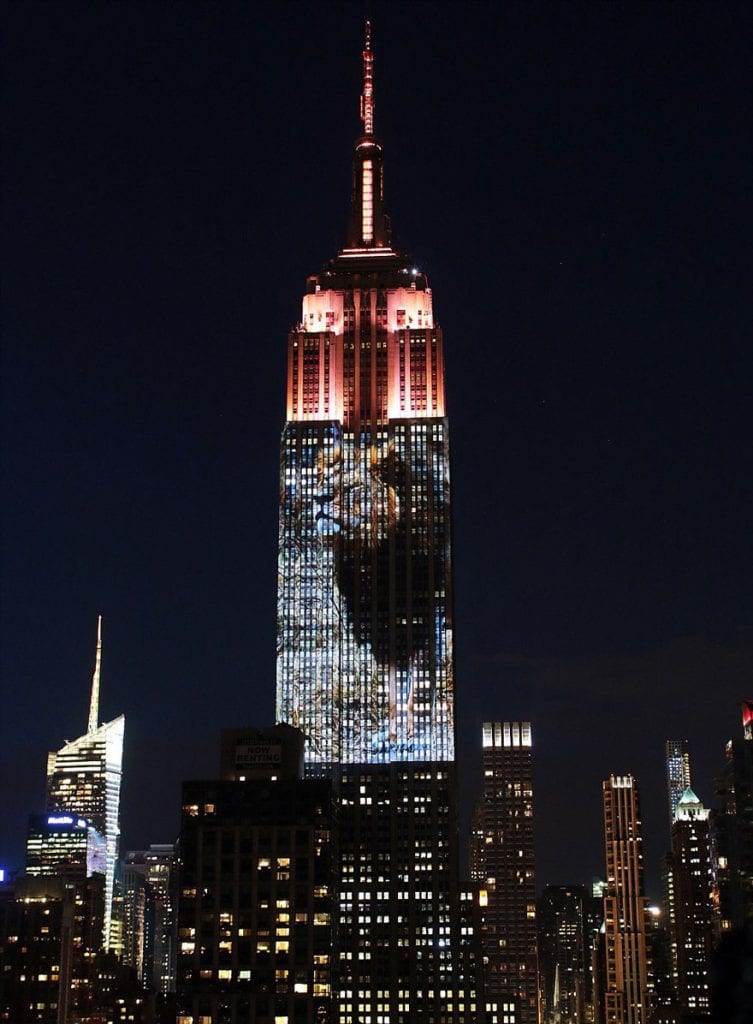 Oh, and you don’t want to miss this cool little event from the other day in honour of Cecil the Lion and 160 endangered animals!

“You’re not afraid of heights, are you?” asked Jean-Yves.

And then I got a full-blown, behind-the-scenes tour! Jean-Yves clearly loves this building. He knows the most intimate details of her origins and her revival. He knows everyone (seriously—everyone!) who works here by name, and they all clearly know him and like him. There seems to be a special camaraderie at work here—most people aren’t usually this happy at work, but everyone seems to be having… fun! at their jobs.

I wax (not that poetically), because this building means so much to me: I speak, of course, of An Affair To Remember. 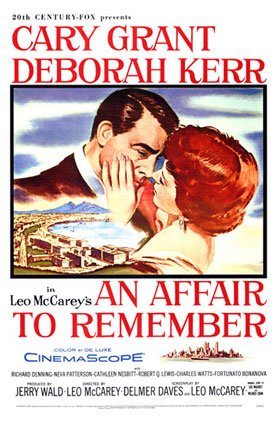 From Cary Grant and Deborah Kerr (she of the oh-my-god-that-kiss-on-the-beach with Burt Lancaster), to its glorious Roaring Twenties Art Deco architecture. For me, the ESB (as we like to call it at the Cool Kids Table) is the most identifiable symbol of New York. No, no, no, not the Chrysler Building! (Just get Jean-Yves started on that building competition! Cads! Cads, the lot of them!)

On the way up, through multiple elevator changes, Jean-Yves engages tourists: “Where are you from? Are you having fun? Can I answer any of your questions?”

{I can see some of them, too, trying to figure out who these two people are who are privileged enough to circumvent the lines—surely one of them must be… isn’t that what’s-her-name!? Apart from a vague but disconcerting resemblance to an older Meryl Streep playing Maggie Thatcher (egad), I’m just a lawyer from California. I feel I’m letting them down.}

We had a grand time heading up through the building, stopping at each lift change to see the extensive renovation the entire building has gone through. Jean-Yves is the quintessential tour guide—he knows his stuff, and boy, does he have some great material to work with.

There are two remarkably well-done exhibits you shouldn’t miss, if you’re heading that way:

Now, everyone goes on about its size: tallest this, almost tallest that. I say pshaw. Okay, it’s nice that it’s so tall, but really, it matters not a whit when you’ve got this living museum to Art Deco magnificence from top to bottom, built (and renovated) with loving attention to detail and authenticity that is humbling and exhilarating at the same time.

So, there we were, going up and up and up, and we finally hit the 102nd floor—the second observation deck (the first is on the 86th floor). You know—the Ordinary Mortals Observation Deck.

The one for tourists.

We went up to THE observation deck. 103rd floor.

The one that requires a key to get into. 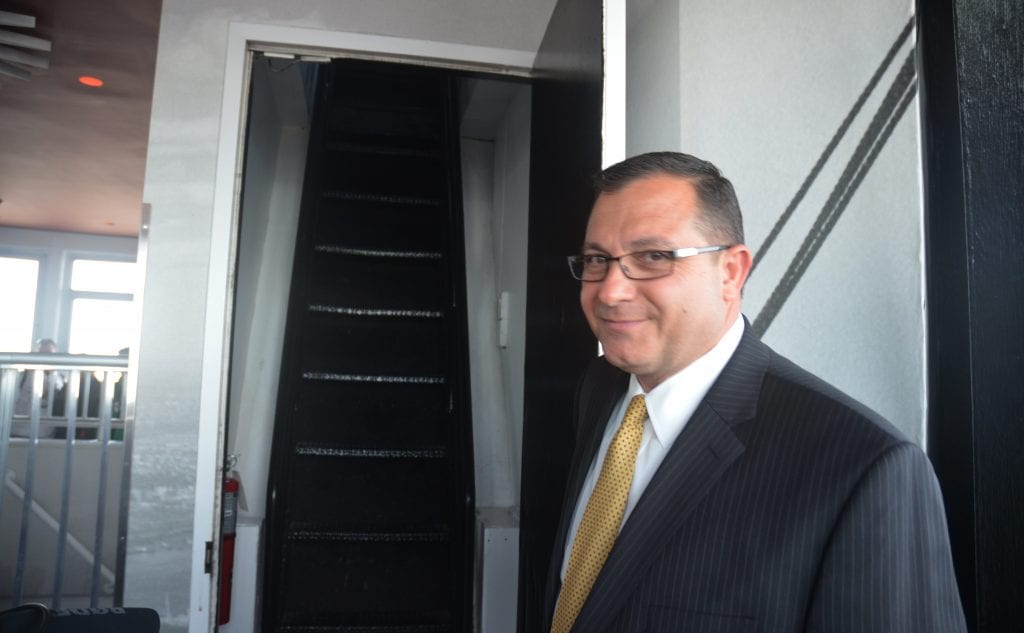 Yeah, me and my high heels (oy, my aching feet) climbed up these steps. Ladder. Steps. Steep, whatever you call them. (Jean-Yves heaves a heavy sigh at me: “Merde, Kim, it wasn’t THAT steep!”).

Up to THE observation deck and the hands-down best fresh-air 360-degree view of New York/New Jersey From On-High!

I really can’t do justice to the details of the renovations, the architecture, the history, and the innovations that this magnificent building has been through. The official Empire State Building website is a fabulous place to start if you’re interested in reading more.

But we weren’t done!

Jean-Yves’ wonderful wife, Christina, was waiting for us at Chelsea Piers. Chris is the Vice President and General Manager of Entertainment Cruises, which includes Bateaux New York.

(And yes, if this boat looks familiar, it is just like the boat that travels the Seine through Paris)

Didn’t I tell you this was the absolute best tourist experience ever?! EVER! 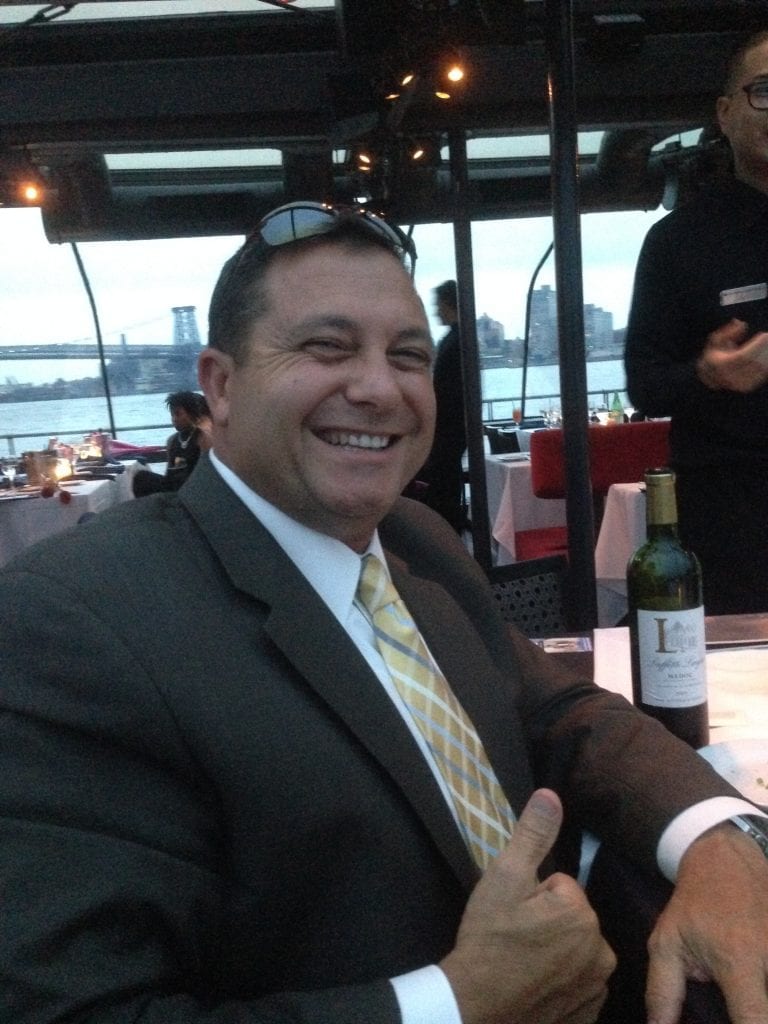 Dinner on the Bateaux is remarkable, especially when you’re dining with the VP. The food was scrumptious—even taking into account a galley the size of my Alfa. I had the Merguez Tasting to start, and then the surf-and-turf. It was all very good, and nicely presented by a waiter with a great sense of humour. Frankly, though, I was too taken with the views to do the food justice! (I know—how often does THAT happen to me?)

[If you’re contemplating heading there now—August 2015—here’s the current dinner menu. Somebody please have the Moroccan Chicken and post notes here!}

We left the dock when it was still light out, and we ordered wine.

We cruised all the way to the Statue of Liberty, where the boat did a very sharp 180-degree turn (like, on a dime!) so that everyone on board could get the same view. 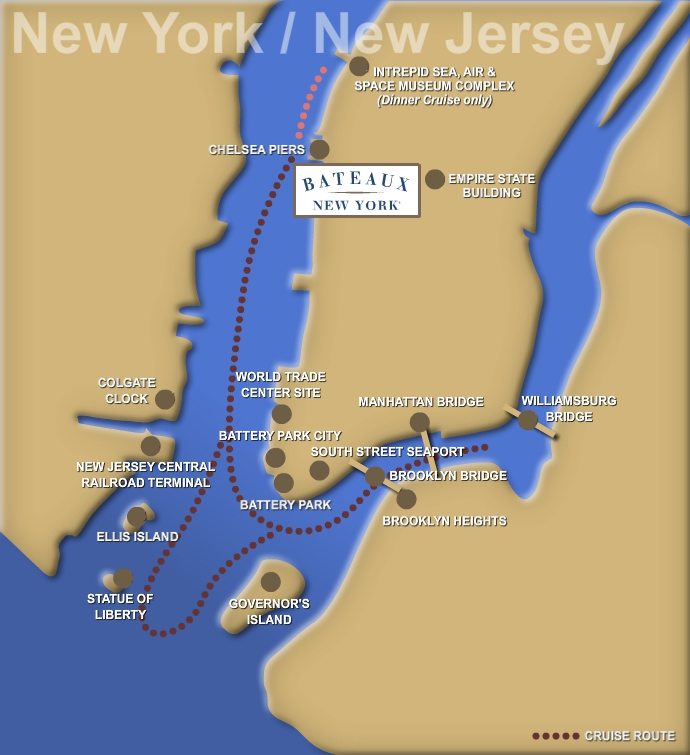 We did this. I think. The actual route gets a little hazy after two (three?) bottles of wine!

I’m sorry to say that I wasn’t taking a lot of snaps—I was too busy taking all this in! Mouth agape most of the time, I’m sure, I was the unabashed and quintessential ogling tourist! There we were at the very base of the Statue of Liberty, in all her gorgeously-lit green splendor! (“Bring me your tired, your poor, your huddled masses,” she says, while a 2014 Congress pondered how to deport 50,000 children fleeing poverty and fear.) 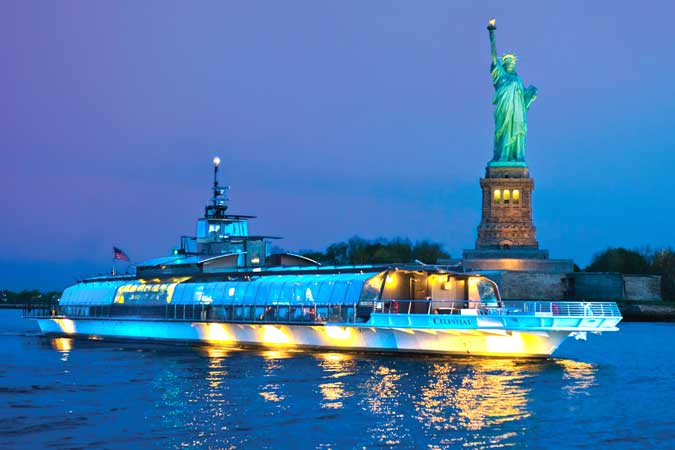 My first ever up-close view of the Statue of Liberty!

The Statue was enshrouded by a spectacular lightning storm. As I live in San Diego, this was the icing on the cake!

Rain!, and… and lightning!!

AND the Statue of Liberty!

Damn, it just doesn’t get much better than this!

Because it’s storming outside and they won’t let us out onto the observation deck. So Chris takes me up to the Captain’s cockpit. Here, Jean-Yves—who has clearly missed his calling as a boat pilot—gives me a clear technical description of what makes this boat tick (and why she can turn on a freaking dime in place!).

Oh, also? I have a front-seat view of this magnificent harbor! Like the glass walls of the boat weren’t enough!

I am bewitched, bothered, and bewildered! I’ve visited New York before. Frequently, even. I have dined very well there, done a few museums and the underground, and even survived a mugging.

But this…. THIS was an experience to remember.

Jean-Yves and Chris: thank you.