“I got busted at the border for smuggling grass.”

It’s never good when your partner comes home, and his first words are “I got busted.” Especially when you’re flat on your back with the flu and your partner has just returned from Tijuana, Mexico, which involved 1) a visit to our dentist; 2) copious quantities of shrimp; and; 3) shopping.

And that’s all I’m sayin’ ‘bout that.

Tequila for what ails ya

We live in a small California town in horse country about 10 miles inland from San Diego and 20 miles from Mexico. We have  six cats (IT WAS AN ACCIDENT!) and a horse.

This year, San Diego County and I had the flu for Christmas and New Years. Rony is immune to illness, so he played nurse-maid. Rony is my partner and almost-husband. I’m actually still married to James, my semi-ex-husband, who lives in Iowa and is my best friend and who is also friends with Rony and ….

Anyway, as if having the flu wasn’t enough, I had run out of … tequila. I had run out of tequila, which is definitely not indicated for the treatment of hypertension, and insofar as it’s legal to import—and write about—two bottles of tequila (not indicated for the treatment of hypertension), Rony (who is an amazing nurse, by the way) volunteered to make a run down to Tijuana to get some. I should note that this ’tequila’ is prescribed by our primary care physician, who is a Mexican doctor practicing in TJ and whom we love and adore because a) she speaks in complete sentences; b) she has never once conducted an exam with a laptop stuffed under her nose; and c) (and most importantly) she lets us speak in complete sentences.

Everyone with a US-based physician who does the same, raise your hand!

Yeah. I didn’t think so.

With only one horse (we used to have two), we had run out of hay, but not alfalfa, and it didn’t make much sense to have our hay guys at Carter’s Hay and Grain bring over just a few bales of hay until we were ready for a full delivery. (It probably helps to have horses for that to make much sense, so you’ll just have to go along with me here.)

So Rony—an ever-practical Israeli who drives a large American car with a VERY large trunk—decided that he would buy one bale at a time and haul it home in his trunk until we needed a full delivery.

Rony’s a life-long city boy and a devoted western movie fan, so the first time he came back with the hay, he was as excited as a little kid: “Man, my trunk smells like a Montana ranch!”

Well, not exactly, but it did smell strongly of sweet hay, of course, and Rony, feeling suitably countrified, wore his cowboy boots on his next few runs to Carter’s. 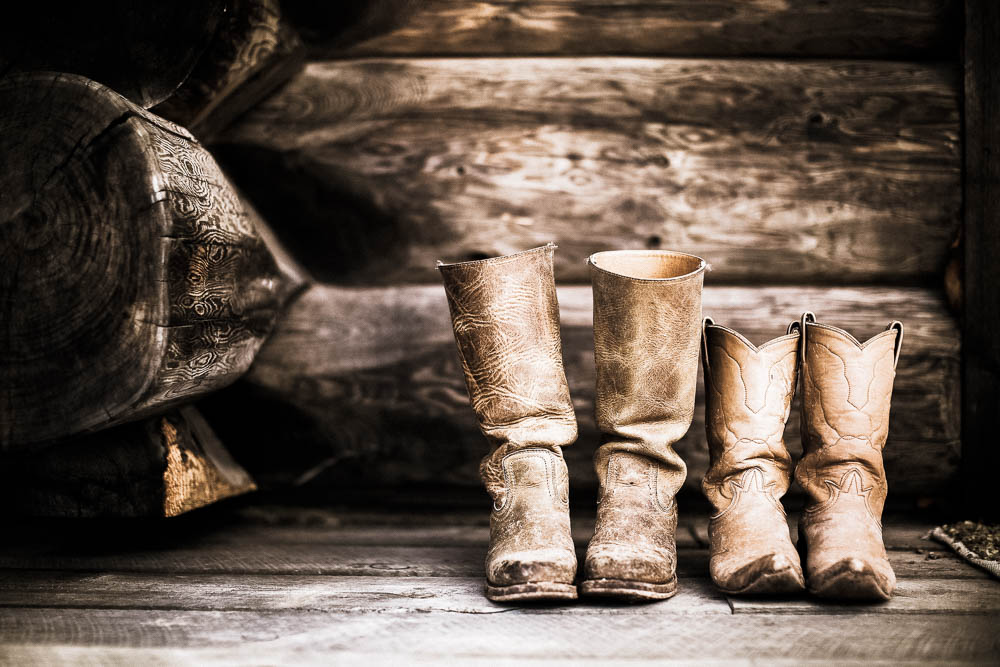 So now Rony has a genu-ine pick-up truck, of sorts, complete with the fresh smell of clean hay, and the detritus of same.

On the day in question, off he went to Mexico to see our dentist, pick up my non-hypertension-treating tequila, and eat shrimp cocktail.

This is easy, as we have a SENTRI Pass that acts as a “Get Out of Mexico Fast” card. We get to use the much shorter SENTRI lanes at the border crossing, without (in principle) the hassle that the poor muddled masses usually face from our ever-genial and polite United States Border Patrol agents.

Coming back from Tijuana that day, Rony used the SENTRI Lanes.

And that’s where the trouble started.

Let me ask a rhetorical question at this point, posed originally, I believe, by Burt Reynolds to the tune of a couple of banjos: what do you do with an under-educated macho-assed redneck kumquat with small… fingers?

Why, you make him an agent of the United States Border Patrol, of course, where he can freely wave his tiny appendage around like Donald Trump’s nuclear button! 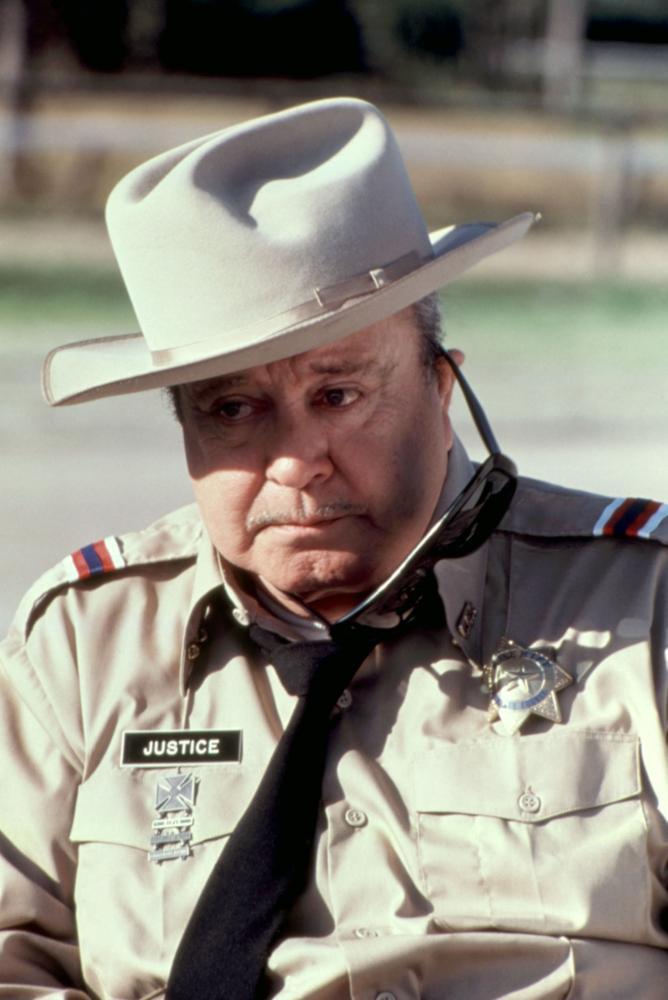 “Would you mind opening your trunk for me, please, sir?”

We travel to Mexico like some people run down to Walmart, but this was the first time anyone had asked to inspect the car. But hey [see what I did there? Heh.], we’re law-abiding citizens. For the most part. Hell, I’m an officer of the court!

This guy—we’ll call him Officer Obie—was one of those fake-polite kumquats we all know and love. You know the one: lots of “pleases” and “sirs” and “thank you, I WILL give you another” kumquat types.

Would you mind? Why yes, sir, Officer Obie, sir, I would mind, since you’ve asked.

But this was Rony, a former officer in the IDF, all-around cool cucumber, and fairly straight arrow. (Well, except for the whole tequila-running thing.) So, of course, without giving it a thought, Rony popped the boot and watched Officer Obie in the rear-view mirrors as he cautiously approached the trunk, peeked in, and recoiled in horror.

Seriously, this was a hands-waving, Henny Penny, HOLY FUCK THE SKY IS FALLING leap backward.

”WHAT is this, sir?!” he yelped. “WHAT IS THIS?! Are you trafficking grass across the border?”

“Um, no sir, I am not trafficking in anything. I just went to Tijuana to see my dentist and have some shrimp.”

“There is grass in this trunk! Why are you bringing grass into the United States from Mexico?!”

“I’m not bringing grass in from Mexico, sir. There may be a few pieces of leftover hay that I bought in California to feed our horse, but that’s about it.”

“Are you arguing with me, kid?”

“No sir, Officer Obie, sir, I am not arguing with you; I am just trying to explain…”

“Are you bringing dirt across the border, too?”

“What were you doing on a farm in Mexico? Kid, do you have any idea what kind of diseases you could bring into the United States from a Mexican farm??!”

“But,” tried Rony, “I wasn’t on a farm in Mexico. I was at my dentist! And I’m not bringing anything back from Mexico.”

Well, not grass OR hay, and certainly not any tequila that is definitely not indicated for the treatment of hypertension.

Officer Obie kept asking Rony why he was arguing with him, and Rony kept responding that he wasn’t arguing, in what I can hear clearly in my head as his “Now, let’s allllll be reasonable and put our weapons down reeeeal slow-like” voice.

“Seriously, I just buy the hay my wife tells me to buy, and I bring it home. I buy the hay in the United States, and I deliver it straight to our horse, who also lives in the United States. I make no deviations from this itinerary, so I’m fairly confident in telling you that this hay is as red-blooded American as you are ever going to find. Sir.”

The scene of the crime

Officer Obie by now had worked up a head of steam and decided that the best way to deal with this belligerent Hay Smuggler was to hit him where it hurts.

“Sir, you are violating the terms of your SENTRI agreement by importing hay into the United States from Mexico. I can take your SENTRI privileges away from you, you know. Just. Like. That!”

Officer Obie headed back over to his booth, then, to write up his report about the Scene of the Crime, which I’m pretty sure was complete with circles and arrows and a paragraph on the back….

When he came out, he wrapped the Scene of the Crime Report around the SENTRI card and stuck it under a windscreen wiper.

“You see that inspector standing across the way blinking his flashlight at us?”

You mean the one who looks like Don Adams? 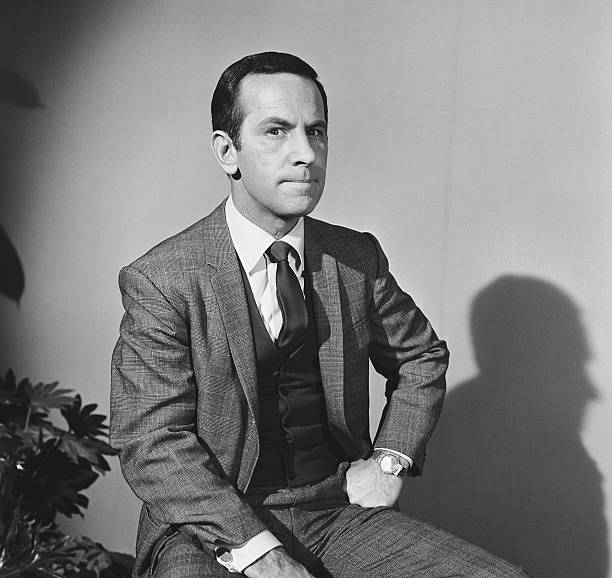 “I want you to drive on over there to him, and I’ll meet you there.

“Good evening, officers,” said our intrepid hero wryly. “What seems to be the problem?”

“Well, sir, we understand that you are importing unauthorized agricultural products into the United States.”

Without another word, Rony invited them back to the Scene of the Crime, where he opened the trunk for their perusal.

Peering in, one of the Border Patrol Inspectors seemed confused.

“What exactly is it that you’re importing, sir?”

By this time, Officer Obie had made his way over to the Scene of the Crime and cleared things right up for everyone:

“This man is trafficking grass into the United States!”

I’m not sure that word means what you think it does, Officer Obie.

At which point, one of the inspectors reached into the trunk and pulled out a piece of paper.

“This looks like a receipt,” she said. “Why, it is a receipt. For hay. Hay purchased in Lakeside, California. See?”

THIS IS A RECEIPT
THIS HAY WAS BOUGHT IN THE UNITED STATES AND WAS DEFINITELY NOT BOUGHT, STOLEN, OR GROWN IN MEXICO.

Rony had determined that his best course of action now was simply silence and knowing nods.

Kowtowing might have been too obvious, of course, but a well-timed “Yas’m” can do wonders in situations like these. 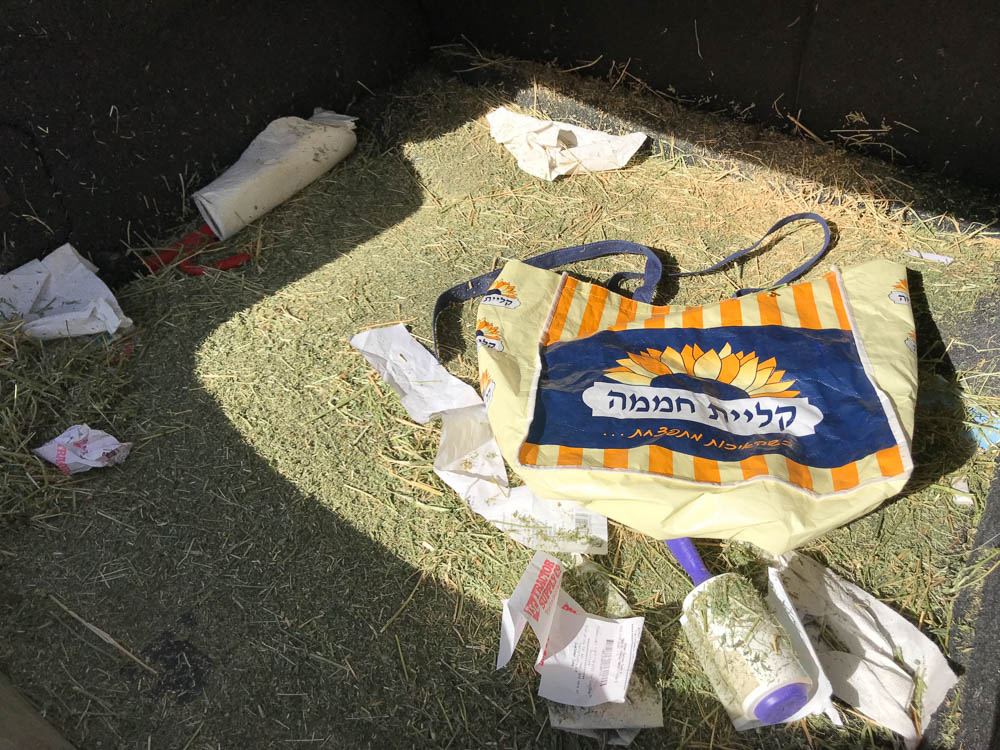 I have high hopes that this whole episode wasn’t dragged past ridiculousness because of the squiggly writing on this shopping bag, which, to a redneck kumquat could look like Terrorist writing!

You can get anything you want

It was all pretty much a done deal after that. They made Rony pop the bonnet to make sure he wasn’t smuggling cows in the engine compartment, and they verbally reprimanded him for not vacuuming his car more often.

“You know, sir, we can’t be too careful with Mexican hay. That country is full of rapists and mutant farmers and all kinds of mean, nasty ugly things…. And dirt. They have some pretty bad dirt down there! We just can’t be too careful. And that’s all we’re being, is careful-like. Now, I want you to run on home, hear? I could take away your SENTRI Pass, you know, but I’m not going to do that. Today.

“And clean your car. If you’re going to go back and forth to Mexico, be sure you’re not bringing back any plant-like stuff. Or dirt. NO MEXICAN DIRT!!!”

I am all about protecting California agriculture, and the people who work with our Department of Food and Agriculture have, I am sure, a thankless job, especially those who man our Border Protection Stations. Established in the early 1920s, they comprise today 16 stations, checking about 20 million private and 7 million commercial vehicles per year. Click here if you’d like to read more about the excellent work that they do.

This individual incident was frustrating, and I assume it was frustrating for all parties concerned. For Rony, of course, who just wanted to get home. For the Agricultural Agents who, truth be told, were calm and polite, and as equally perplexed as Rony.

And for Officer Obie, my motivation for writing this rant, who could better address his issues by shopping for a penis enlarger.

Whether he was having a rough day, or he was bored, or just really needed to push a big guy around, or was ignorant enough to think that the Hebrew on our shopping bag was instructions for how to blow up shit, I don’t really care. I have had my fill of rude and obnoxious Border Patrol Agents (who are part of U.S. Customs and Border Protection, which falls under the Department of Homeland Security), and Transportation Security Administration yahoos (who also fall under Homeland Security) at airports.