A year ago, Rony and I moved to Baja, California from San Diego. We absolutely love it here, but a lot of friends and family think we’re nutters.

“It’s so dangerous down there! Aren’t you afraid of…” name your poison: drug lords, cartels, thieves, disease, bad water,

I am touched by the concern, of course, but given my upbringing, I am also a wee bit amused. I’ve lived in two and a half war zones, muddled through multiple coups d’état (some successful, some not-so-much), varied civil unrest, and met any number of animals and reptiles intent on killing me.

Trust me, Baja is a cinch! 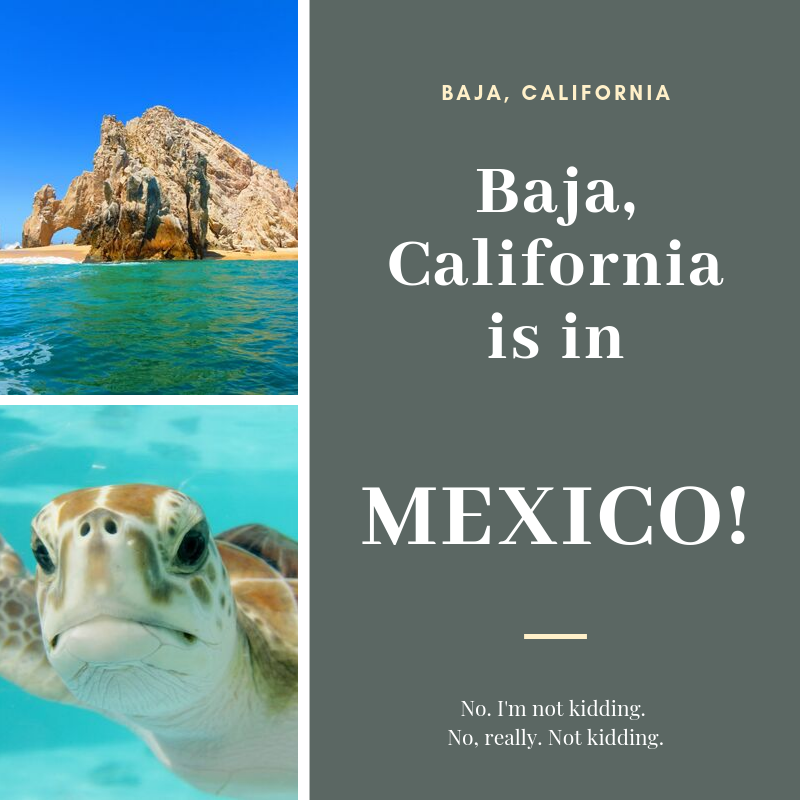 Recently, though, a Facebook posting made me stop to think.

“Hunh,” I thunk. “The only people worried about our living in México are non-expat friends. And even though most of these friends can recite the litany of countries I’ve lived in (sing along with me now: Laos, Taiwan, Thailand, Vietnam, Ghana, Zaire, France, England), they have no way to fathom how surreal life could be in a pre-1990 third world. Hell, tourists today vacation in Thailand and think they’re roughing it!” 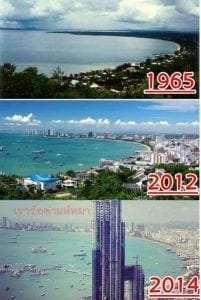 (I remember Pattaya before air conditioning. Hell, before the INTERNET!)

Enter a Facebook thread from my old school in Vientiane, Laos:

“Describe one of your most unique experiences living in Laos.”

We are up to 141 responses, and this from a very small school. Many of the answers made me smile, some produced guffaws, others made me cry. Few were within the realm of what might pass for normalcy in a typical American’s youth.

Here’s one of my favourite responses. It’s from Leigh Coleman Hotujec, whose entire family and life in Laos I would love to chronicle!

Coming home from work, 9 months after my wedding, to find my house was in the process of being “exorcised” of bad “pee” (spirits) by local monks at the request of our live-in maid. She had attended our wedding, witnessed me standing at the altar with [my new husband] and our best man (who moved in with us on our wedding night!), and she could not understand why – after 9 months and TWO husbands – I wasn’t pregnant yet. Had to be bad spirits in the house, right???

Yeah, I guess that might need a little explaining.

Laos has a delightfully malleable view of religion that would confound most outsiders. Buddhism is the most widely practiced, but it is supplemented by strong animist beliefs. In fact, the two are pretty much interwoven and inextricably bonded. Which is kind of hip for a communist country!

What my friend, Leigh, is referring to here is the phonetic adaptation of phi, the spirits—good and bad—that permeate (and actually pre-date) Lao’s Buddhism, as well as all other cultural and spiritual life.

Over the four-plus years I lived in Laos, we lived in four different houses. Each move was followed in fairly short order by a visit from two Buddhist monks (they always seemed to travel in pairs). They would solemnly check out the most appropriate placement for our phi house, and bless the main house during the same visit. I don’t remember the details, but I do recall an overwhelming smell of incense.

One of my weekly chores was to ensure that the phi always had something to eat; an orange or mango, some cooked rice, maybe sweet sticky rice if I needed something. And if I really needed help, I’d add a shot of my dad’s whiskey.

As I wrote this blog, I posted a plea for photos of phi houses in Laos. (In spite of my mom being a world-class photographer, few of our photos from Laos survived the evacuation from Saigon in 1975.) Sure enough, Daovieng Norath and Grace Hart Clark, two schoolmates from ASV, came straight through. In fact, Dao was waiting for a friend in downtown Vientiane, Laos when he saw my post. He took a stroll around a one-block area and shot these fabulous photos! 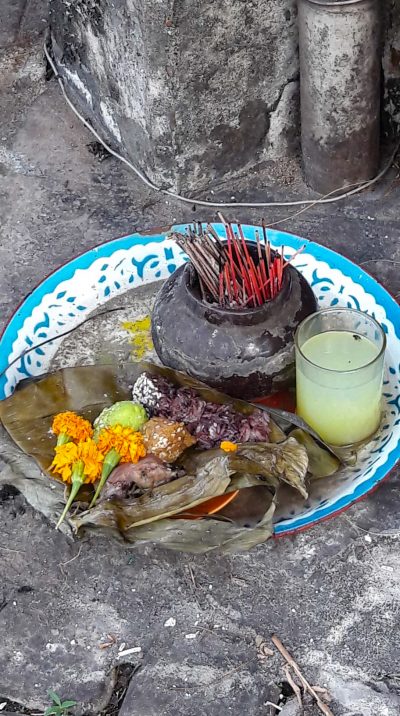 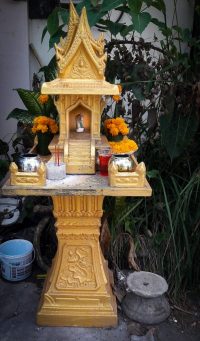 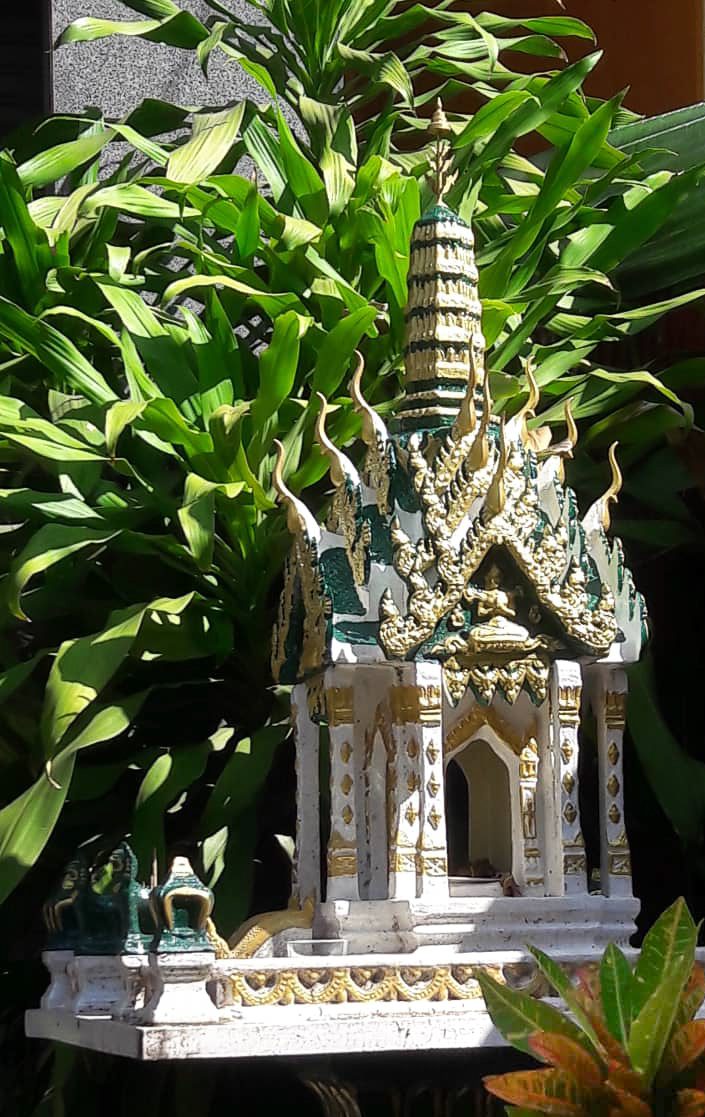 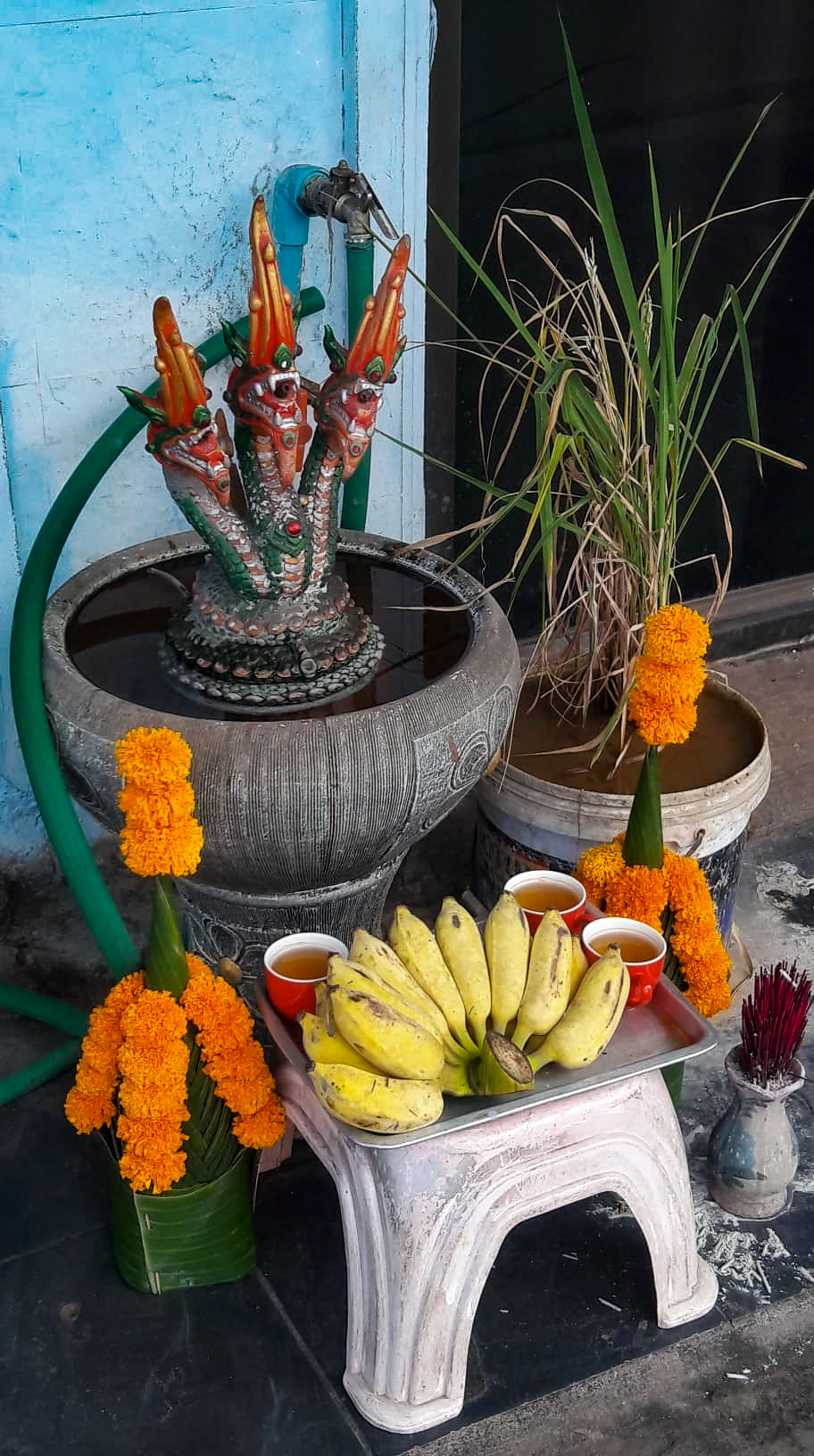 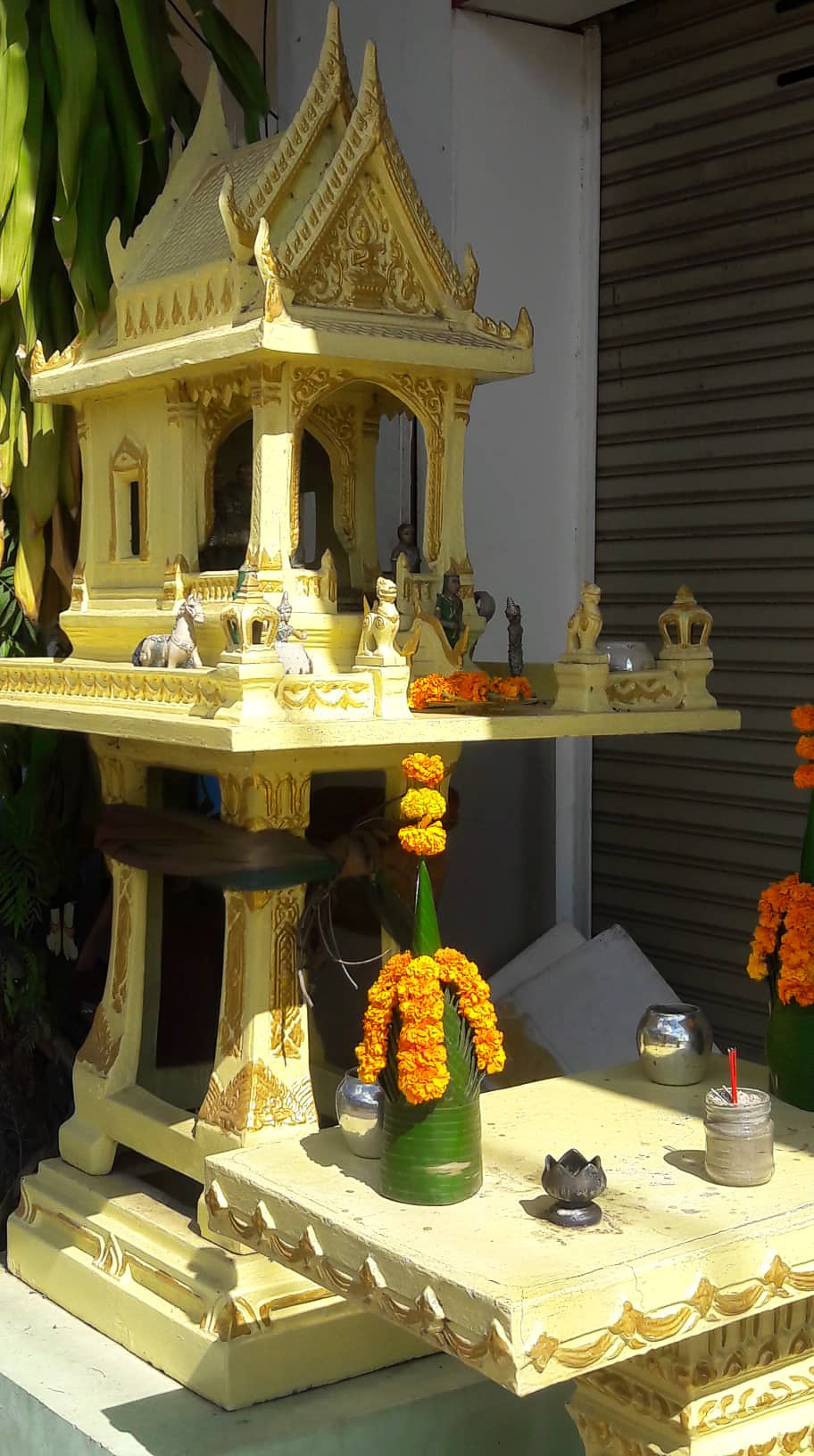 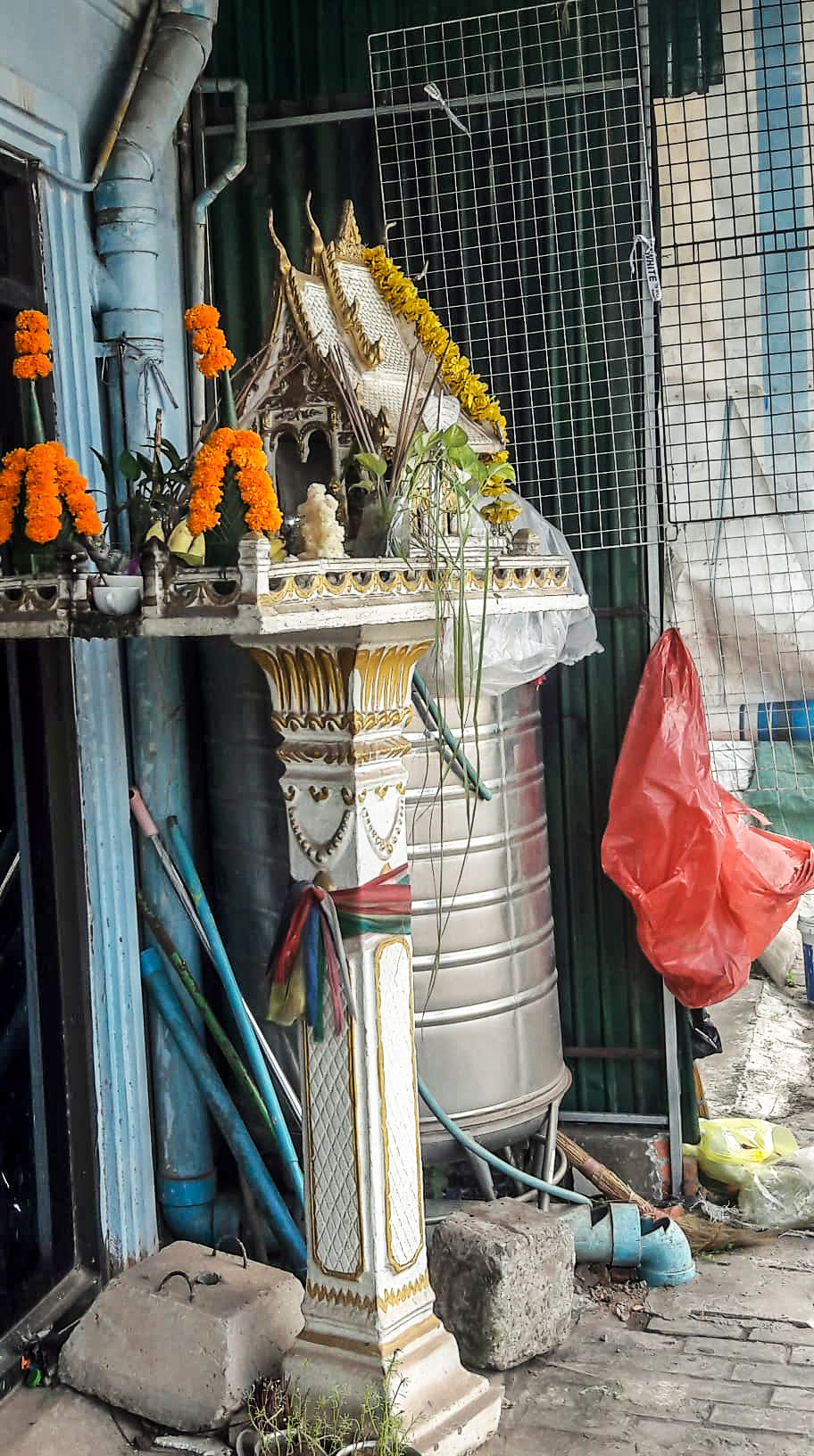 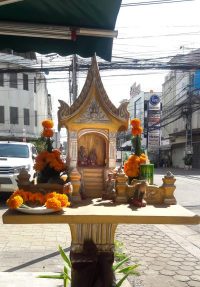 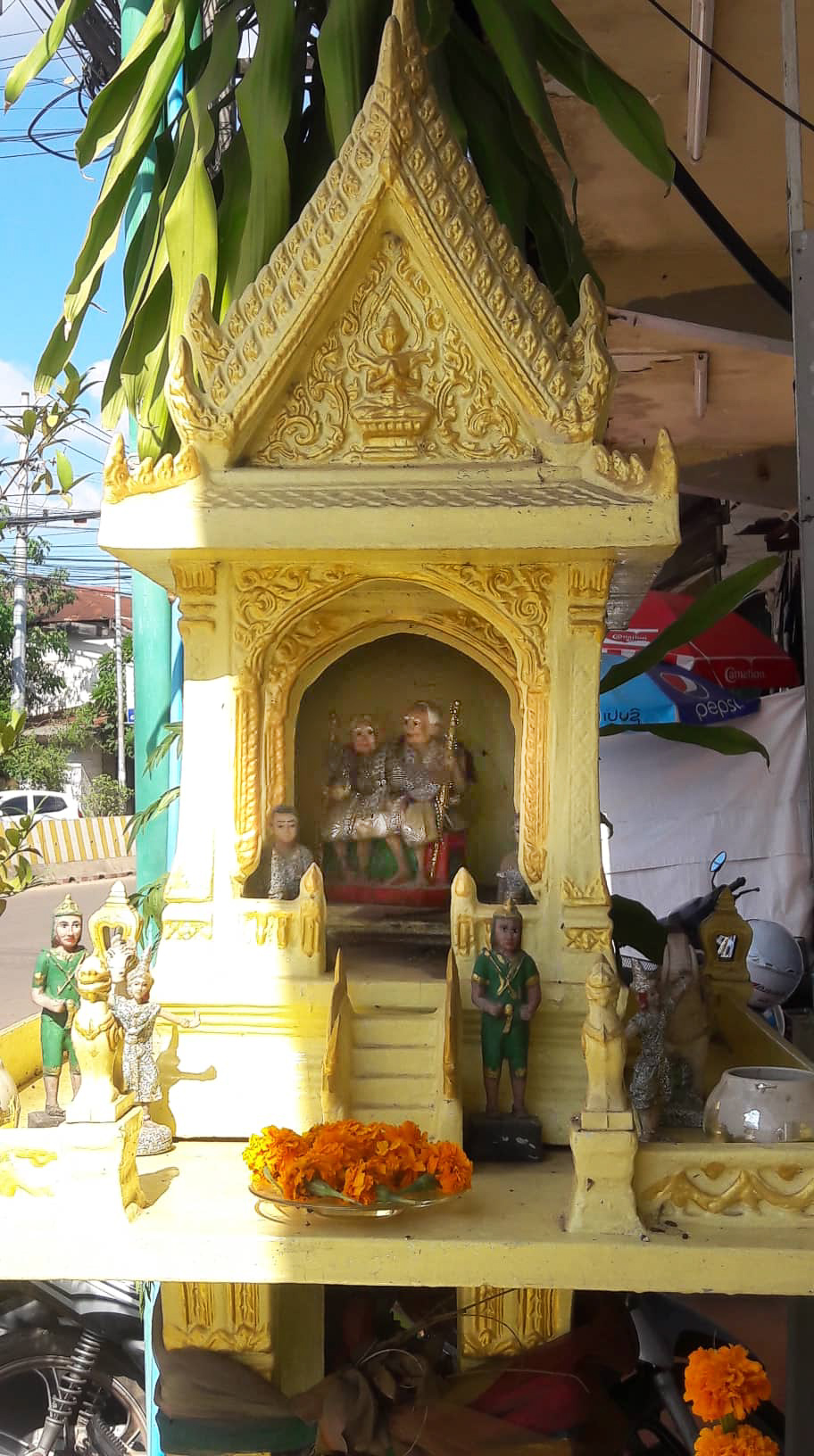 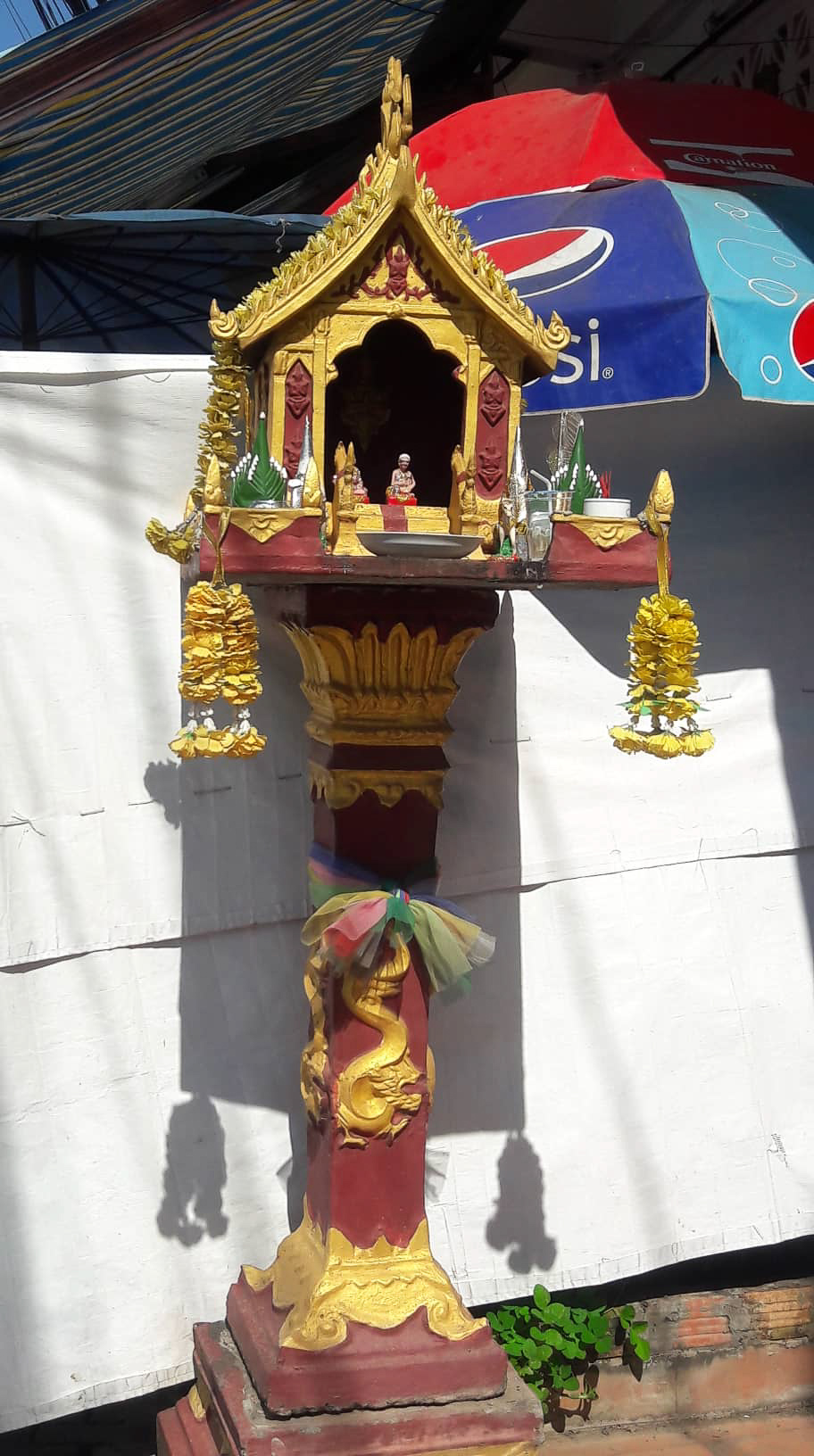 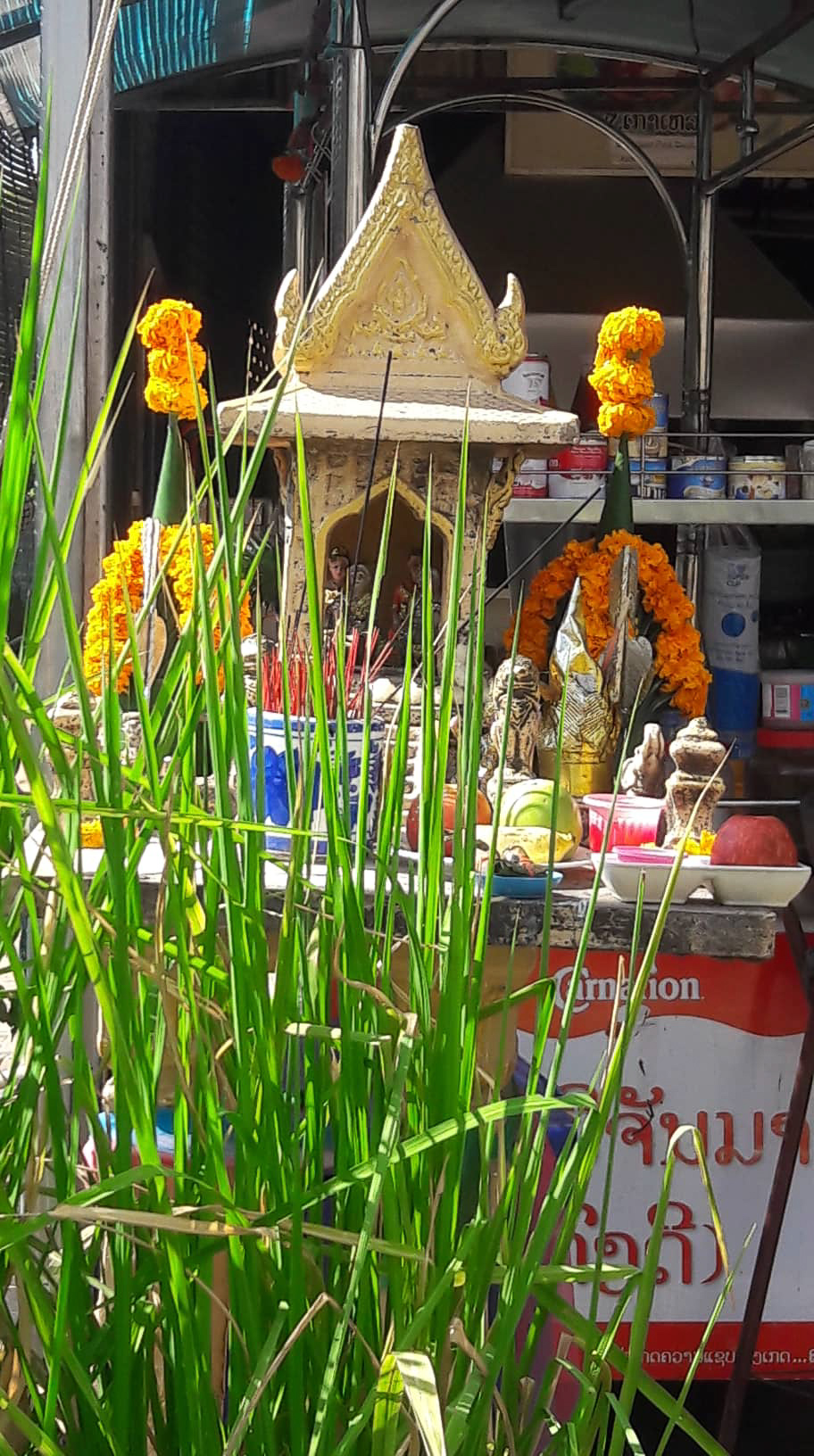 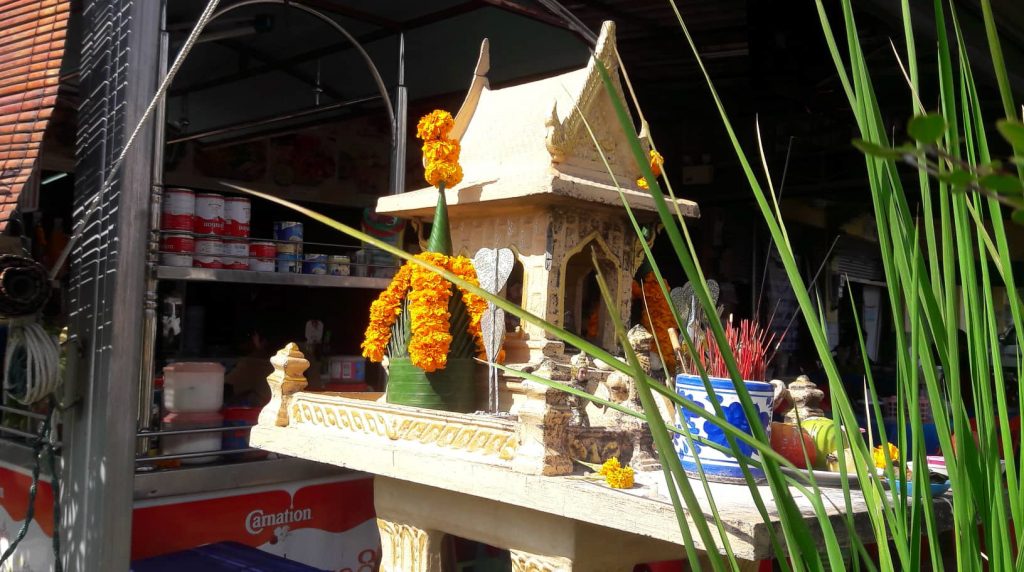 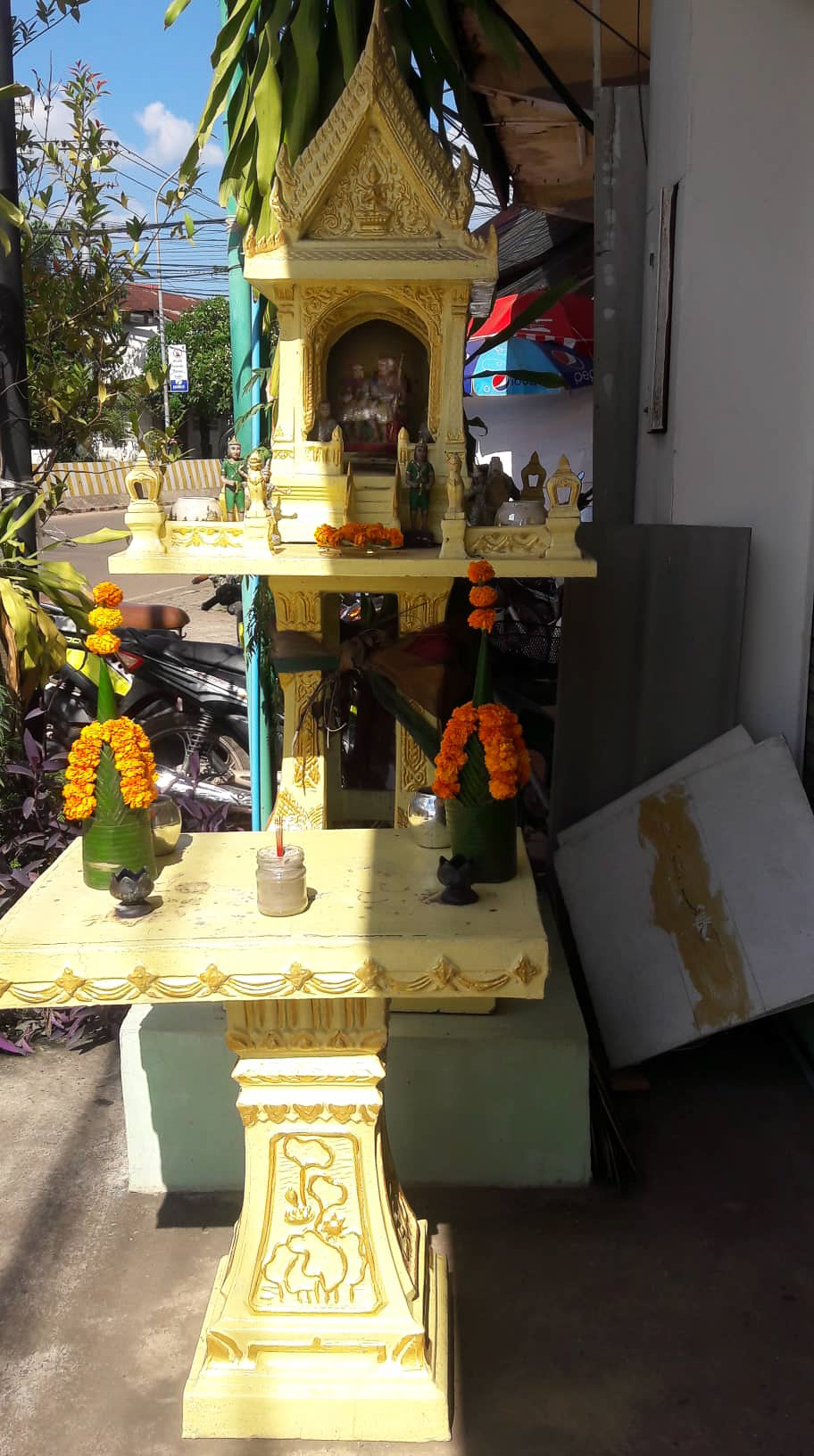 Loading the next set of gallery items...
Load More

Our phi houses weren’t quite so elaborate or large as some of those that my schoolmates provided, but they were a constant presence in my life, exactly in step with the saffron-robed monks who were also.

More information on animism and the spirit world in Laos

For a couple of rather dry overviews, try:

Or, for something much more entertaining, do try the delightful Dr. Siri Paiboun Mysteries by Colin Cotterill:

Laos, 1976: Dr. Siri Paiboun, a 72-year-old medical doctor, has been unwillingly appointed the national coroner of newly-socialist Laos. Though his lab is underfunded, his boss is incompetent, and his support staff is quirky to say the least, Siri’s sense of humor gets him through his often frustrating days.
When the body of the wife of a prominent politician comes through his morgue, Siri has reason to suspect the woman has been murdered. To get to the truth, Siri and his team face government secrets, spying neighbors, victim hauntings, Hmong shamans, botched romances, and other deadly dangers. Somehow, Siri must figure out a way to balance the will of the party and the will of the dead.