Think about it: if your favourite herb lady had invented a cure for COVID-19,
do you really think she would market it quietly
on a passive website and Facebook posts?

And if, by some insane luck, their concoction did cure COVID-19,
why wouldn’t you be outraged that they were selling it?

I live in Baja, California, where we have a plethora of people peddling “alternative” medicine, from homeopaths to stem cell clinics to chiropractors to Traditional Chinese Medicine practitioners.

We also have a lot of retired people with plenty of aches and pains, and sometimes more cents than sense. They are ripe for the picking and pick these practitioners do.

Don’t get me wrong; I’m all about placebo effects. If it’s working for you and you can afford it, I say good on ya! What makes me angry, though, I mean blood-boiling, teeth-gnashing seething, are those who prey on the desperate and vulnerable. Here, I’m talking about the horror stories of desperate mothers who will beg, borrow, or steal to pay for a huckster’s non-existent cure for their child’s cancer at a Baja stem cell clinic. Or the herbalists who purport to cure your diabetes!, heart disease!, gangrene!, seizures!

That’s where I draw the line at placebo effects. Because if some poor patient believes these quacks, they’re liable to forsake or stop taking a therapy that’s actually proven to work. See also here (died of malnutrition and pneumonia under naturopathic care), or here (killed by chiropractic neck manipulation), or here (died of cancer under homeopathic care).

Just because a concoction is labeled as an “herbal remedy” or “plant remedy” or “natural remedy” or Traditional Chinese Medicine (TCM), does not mean that that drug (for drug, it certainly is) is any safer or more effective than a drug from a pharmaceutical company. 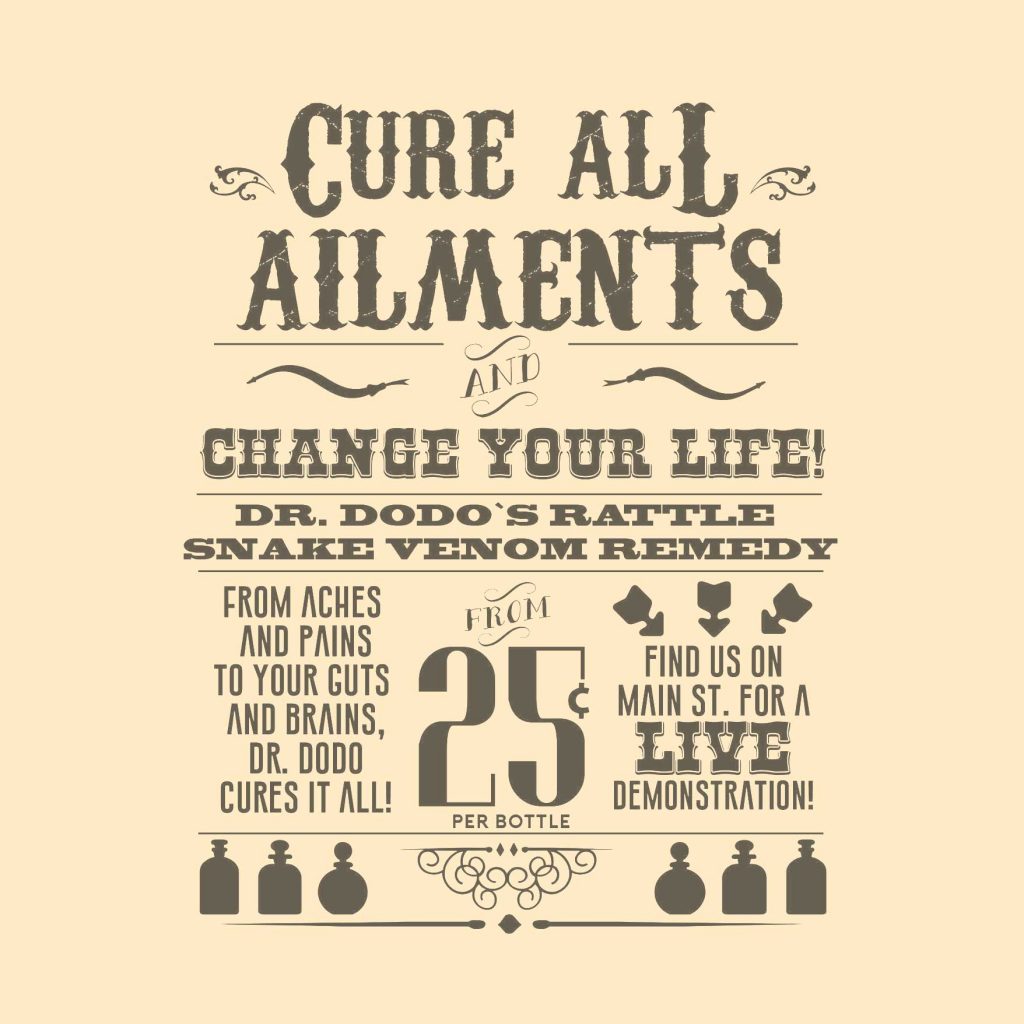 In fact, it may be less safe and effective, but you know what? That is very hard to figure out, because these “traditional” remedies have not been subjected to the same exhaustive testing and subsequent disclosure as FDA-approved drugs. This makes it difficult, if not impossible, to research (with any degree of certainty) the effectiveness, contraindications, and adverse effects of such “remedies.”

This is unfortunate, because there is clearly a place for traditional medicine in our healthcare toolkit. (See Clinical Research of Traditional Chinese Medicine Needs to Develop Its Own System of Core Outcome Sets for an interesting proposal for introducing Core Outcome Sets as an alternative to establishing endpoints that would not typically be acceptable in the design of a clinical trial.

As with any healthcare scare, snake oil sales are going through the roof since COVID-19 hit. Everyone and her sister cures or prevents COVID-19, and they’re willing to let you in on the secret; for a price.

The top federal prosecutor in Los Angeles says that he expects the scope and breadth of such scams to grow as the government distributes payments to millions of people, offering a fresh pool of money for scammers to exploit.

So far, his office has charged just two people with selling scam “cures”:

I was recently involved in a discussion with a group of Facebook acquaintances. They were discussing a local “doctor” of Traditional Chinese Medicine who is promoting one of her products that, according to her website, had been “recently revised due to the COVID-19 epidemic.” (Sound familiar?)

Her magic pills are supposed to “boost the immune system to the level that it can help from [sic] viruses that are epidemic in nature such as to help prevent and treat symptoms of Coronavirus.”

Prevent and treat symptoms of Coronavirus. As an attorney, that claim would be fun to parse in court. But your average layperson will deduce that these pills cure COVID-19.

Do they? It seems unlikely, or surely the Chinese would have deployed it to cure the more than 3,000 people who have died there so far.

We also have to wonder where these miracle cures have been during other virus epidemics. I mean, one virus is very different from another, but this promoter avers that it only took her “weeks of research” to come up with the formula.

So what’s in this Magical Mystery Cure? The dosage for this miracle cure is only 30 to 50 pills, two to three times a day. So perhaps this magic really does work; I mean, with all that counting, who has time to socialize?

The packaging says that the formula contains woad leaf, atractylodes rhizome, honeysuckle flower, siler, pinellia rhizome, white mulberry leaf, mint, and Tsaoko fruit. By themselves, they sound pretty harmless; they are, after all, “just” herbs, and what could possibly be wrong with herbs?

As I noted above, it’s hard to tell because there just are not that many studies on them. Here’s what I gathered in a quick review of ingredients:

Largehead Atractylodes Rhizome (LAR) (atractylodes macrocephala) is the most commonly used Chinese herbal medicine for threatened miscarriage. Potential reproductive toxicity of LAR was identified in early pregnancy in animals, and skeletal anomalies, including loss of ulna and distal digits, shortening of humerus and radius were observed in higher clinical dose groups.

Woad Leaf, or Isatis tinctoria L., contains chemicals similar to the chemicals in aspirin. There is some concern that isatis can trigger an asthma attack or an allergic reaction in people who are allergic to aspirin.

Honeysuckle Flower has anti-inflammatory properties. It is also an anti-coagulant and should be used with caution with other drugs that also slow blood clotting. In fact, “Patients on warfarin[1] therapy should be discouraged from taking herbal medicines, period, especially preparations that are already known to have antiplatelet and antithrombotic effects.” See Interaction between warfarin and the herbal product quilinggao; see also, Use of herbal medicines by patients receiving warfarin.

[1] Warfarin is commonly used to treat blood clots, such as deep vein thrombosis and pulmonary embolism, and to prevent stroke in people with atrial fibrillation, valvular heart disease, or artificial heart valves.

Siler root (saposhnikoviae divaricate) is traditionally used to treat rheumatism and allergic rhinitis. I could find no known contraindications, but again, there’s very little evidence to go on.

Pinelliae Rhizoma, the tuber of pinellia ternate, is a commonly used herb with high bioactivity against cough and vomiting; it is also used as an expectorant. Depending on its source, pinellia contains ephedra alkaloids. FDA banned the sale of supplements containing ephedrine alkaloids in 2004 in response to increasing evidence that ephedra caused sudden cardiac death and stroke. [I worked on litigation related to ephedra in the early 2000s. Happy to discuss what I can.]

White Mulberry Leaf is used to lower blood sugar in people with Type 2 diabetes. Because of its effect on blood glucose, white mulberry should be used with caution in people on diabetic medications, including insulin.

Tsaoko Fruit (lanxangia tsaoko): native to China, Lao, and Vietnam. I found no information about toxicity, but according to the International Union for Conservation of Nature’s Red List of Threatened Species, it is listed at Near Threatened: “This species has a small extent of occurrence (7,989 km²) and it appears to be only known from four locations. The main threat is over-collection of the fruits and possible long-term genetic or reduced reproductive success issues and possible inbreeding issues between the wild and cultivated plants.”

A call for Common Sense and an Honest Conversation

Should we forego taking herbal remedies altogether? I’m not advocating that at all. But I am saying that we should be careful consumers of everything we put in our bodies. We should also be wary of anyone who claims to have a miracle cure for COVID-19, especially if they’re selling the damned stuff.

As one person noted on this thread, “What is incredible is how quickly someone will shove a [pharmaceutical] pill down their throat… with no care, BUT will question the potency of plant ‘medicine’.”

We hear this all the time: BigPharma markets their drugs for the sole purpose of making money. I don’t dispute that entirely; but let’s at least have an honest conversation about it. Because according to the Smithsonian Magazine, Alternative Medicine is a $34 billion per year industry! And, unlike pharmaceuticals, very few traditional remedies are even tested for safety or even efficacy.

Perhaps during these troubled times we should think a little more carefully about human nature, and remember that wolves are sometimes difficult to spot when they’re wearing organic sheepskin.